For House of Commons matters: 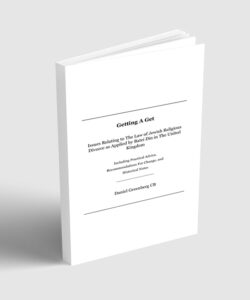 I have just launched my new book “Getting a Get”. The book can be purchased from our Website shop.

On 06 July 2022 the All Party Parliamentary Group on Get Refusal held a meeting in Parliament and on Zoom during which Lord Mendelsohn and I discussed my new book Getting a Get. Please click here to listen to the recording.

The Jewish Chronicle wrote an article about my book “Getting a Get”. The article titled “Rabbis could go to jail if get practices don’t change, warns new book” can be read here.

On 31 July 2022 I was interviewed live by Zev Brenner on his radio station, Talkline Network, the leading Jewish Network in the Metro New York area, about my book Getting a Get.

Description
In the summer of 2021 in the United Kingdom there was considerable controversy, some of which made the pages of the secular press as well as being front-page news in the Jewish media, about the possible criminalisation of get refusal as a result of new offences of coercive behaviour under the law of England and Wales.
Those changes in the law, and events and discussions around them, have potentially caused the biggest changes in living memory to the practicalities of the law of gittin in the United Kingdom.
But in order to have their full effect and to live up to their potential, it is important that the lessons from the events of summer 2021 are recorded, and their implications for get refusal are articulated in a form that allows them to be effectively deployed against get refusers.