In 2003 Sweet & Maxwell approached me with a suggestion of reviving Craies on Legislation after a lapse of around 30 years. The idea had come from Professor Michael Goodman, who in the end co-edited the 8th Edition with me, and we published it in 2004.

It was a challenging project because of the length of time that had elapsed since the last edition. As Lord Browne-Wilkinson said in his foreword to the 8th Edition, “There can have been few sectors of the law that have been so fundamentally altered in the last 30 years as the law affecting the making and construction of legislation affecting the United Kingdom”.

But it was also enormous fun to do, and Michael and I were delighted when the new edition was published in 2004. I produced the 9th Edition in 2008, and the 10th Edition in 2012. The editions have also had mid-term supplements.

The most exciting development for the 2012 edition is the inclusion of contributions from specialist contributors, particularly on devolution issues, European Union law and a new Appendix showing how the work applies in India.

The 11th edition can be bought from Sweet and Maxwell or other major booksellers.

The 12th edition has just been published and is available to buy now. 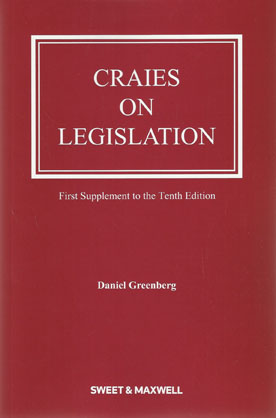